A Word of Anguish from the Cross 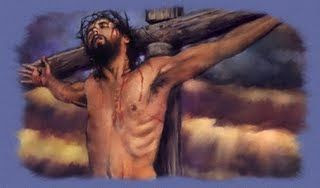 We only have seven recorded phrases that Jesus said while He was dying on the cross. Only one phrase was a question. But what a question!

I want to share a few thoughts I picked up about that question from Arthur W. Pink’s book, ‘The Seven Sayings of the Savior on the Cross.’ They are worth your time to contemplate sin, judgment, Heaven and Hell.

And about the ninth hour Jesus cried with a loud voice, saying, Eli, Eli, lama sabachthani? that is to say, My God, my God, why hast thou forsaken me? (Matthew 27:46)

These words are startling… that the innocent should die…. that God should forsake His Son… that the righteous should be forsaken. This is a cry that shook the universe. Why should God forsake Christ? Here in this scene and in these words we see some unique things…

1. We see the awfulness of sin and the character of its wages.

Jesus was the Perfect Man. But He took on our sin and was receiving the wages due His people. This was not just physical suffering… it was spiritual suffering. The price paid for sin is the separation of God.

2. We see the absolute holiness and justice of God.

Four works on the cross are seen:

God’s holiness is so pure that even His own Son will be punished for sin. Though Jesus never sinned, He took the full punishment as if He had sinned.

3. We see an explanation of Gethsemane.

In the Garden of Gethsemane, Jesus sought to be delivered from ‘the cup.’ ‘The cup’ represented the wrath of a sin hating God. To accept ‘the cup’ was to sever the communion with God. Jesus knew that their godly communion must end if He took our sin on Him. Yet, He followed God’s will.

4. We see the Savior’s faith and fidelity to God.

Even in this cry, Jesus knew that God would listen and would be there. He continued to trust, as is evidenced in the prophetic saying in Psalm 22:11 – “Be not far from me; for trouble is near; for there is none to help.”

5. We see the basis of our salvation.

Christ had to stand in the gap and suffer the penalty for our sins. We are saved because He received the punishment our sins deserved.

6. We see the evidence of Christ’s love.

Jesus willingly suffered for us. The greatness of Christ’s love can only be measured against the wrath of God that was poured upon Him. He loved us more than any other human loved anyone.

7. We see the destruction of future people forsaken by God.

This cry of Jesus foretells the final condition of every lost soul – forsaken of God!

But there is a limit to God’s mercy. The day of mercy will one day be ended. In the Day of Judgment God will deal in justice and not in mercy. He will execute the sentence of condemnation already passed: “He that believeth not shall be damned.”

The offer of forgiveness is presented to everyone. “For whosoever shall call upon the name of the Lord shall be saved.” (Romans 10:13). However, if God did not spare His own Son, though He never sinned, He will not spare those who have sinned who have not received His Son as their Lord and Savior.