A man’s younger son wanted his inheritance so he could have a good time. According to Jewish law, an elder son received twice as much as the other sons and a father could distribute his wealth during his lifetime if he wished. For the younger son to ask for his inheritance was to say, “I wish you were dead.”

“The far county” exists in all our hearts. This younger son dreamed of enjoying his freedom far from home and away from his family. He wanted to have his own way and rebelled against his own father and broke his father’s heart.

Life in the far country was not what he expected. His resources ran out, his friends left him, an famine came and he was forced to do for a stranger what he would not do for his own father – go to work!  This is what sin really does in the lives of those who reject God. Sin promises freedom but only brings slavery. It promises success but brings failure. It promises life but the wages of sin is death. The boy thought he would find himself, but he only lost himself. When God is left out of our lives, enjoyment becomes enslavement. 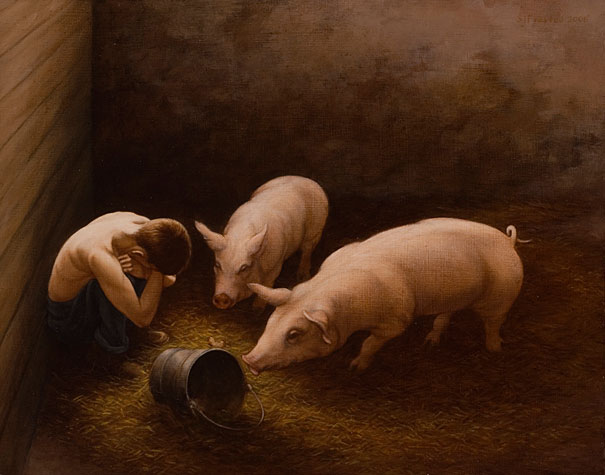 The younger son found himself alone and in desperate condition. So he decided to return home.

To repent means to change one’s mind that that is what the young man did. He ‘came to himself’ – which shows that he really wasn’t himself. There is an insanity in sin.

He changed his mind about himself and his situation – he was a sinner.  He confessed that his father was generous and service at home was better than freedom in a far country. It is God’s goodness, not just man’s badness, that leads us to repentance (Rom. 2:4). If the boy had thought only of himself (his hunger, homesickness, loneliness & sin) he would have despaired. But his bad circumstances helps him see his father in a new way and brought hope.

Had he stopped there, the boy would have experienced only regret & remorse. But real repentance involves our will as well as our mind & emotions.  “I will arise… I will go…. I will say.”  Desire is great, but we must act.

As the young boy approached his home, his father ran out to welcome him. The father not only ran to welcome his son, he honored him with a great feast and invited the village to attend.  The father never permitted the younger son to finish his confession – he interrupted him, forgave him and ordered the celebration.

The father pictures the attitude of God toward sinners who repent – He is rich in His mercy and grace, and great in His love toward them. All this is possible because of the sacrifice of His Son on the cross. We are not saved by God’s love – God loves the whole world but the whole world is not saved. We are saved by God’s grace – grace is love that pays a price.

Everything the younger son had hoped to find in the far country, he discovered back home: clothes, jewelry, friends, joyful celebration, and love.  What made the difference?  instead of saying, “Father, give me!” he said, “Father, make me!”  He was willing to be a servant.

It is interesting to consider the father’s description of his son’s experience: he was dead, and was now alive; he was lost, and now was found. This is the spiritual experience of every lost sinner who comes to the Father through faith in Jesus Christ. There is only one way to come to the Father, and that is through faith in Jesus Christ. Have you come home?

At this point in Jesus’ story, many of us feel pretty good. Our loving Father has forgiven us and it’s all good.  But Jesus introduces us to one more person – the older brother. Some have called this part “The Parable of the Pouting Son.” The older son refused to welcome his brother.

I want to share some things about this son:

Now the big question: Who do you identify with?

The Prodigal Son – In need of forgiveness today!

The Pouting Son – Having a hard time forgiving another!