October 18, 2006, was a date that changed our family. It started like any other day. But by evening, we were in a storm. Some of you have heard our story, but I felt it important to share what we went through thirteen years ago.

I was visiting Paul Zysk’s father in the hospital (I just led him to receive Christ as Savior) when I got a call from a Marine staff sergeant in Lansing, Michigan. She informed me that our son, Josh, who was serving in Iraq, had been wounded. He was fine and would call when he could get to a phone. So, I called my wife, Judy, to let her know what was said and we waited for his call.

To be honest, I wasn’t too worried at the time. In one of the family sessions before Josh left, we were informed the 4 stages of injury:

His injury was #1. So I figured it was minor… maybe he twisted his ankle.

The following day I was at a Bible study and received a call from the same staff sergeant. Her first question was, ‘Is anybody with you?’ Her next statement was ‘Josh’s condition has been downgraded to ‘Severe Injury – Life-threatening.’ He had been shot by a sniper in Fallujah, taken to Balad for surgery, and then to Germany.

I have received bad new, but never like this. I was numb and didn’t know how to cry. I got in my car and started to drive home but my mind would not concentrate on the road. I finally pulled myself together enough to pull in our driveway.

As soon as I walked in the house, Judy knew something was wrong. When I told her, we just stood in our hallway and cried. We had no answers, but feared our son was dying and we couldn’t get to him. We made a few phone calls and waited for more information. We even thought about flying to Germany. 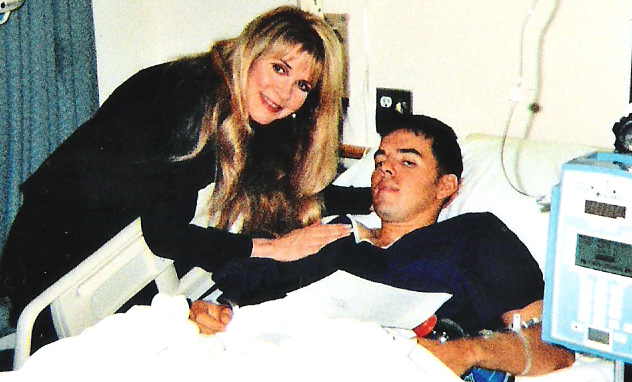 After the longest hours of our life, we got a phone call from a nurse in Germany. She said Josh was in their hospital and conscious. As soon as he got the respirator out, she would have him call. After a few more hours, I heard the best voice I’ve ever heard – Josh’s voice. He was alive and okay.

Over the next few days, we were able to talk and find out what happened.

His patrol unit was getting ready to enter a house in Fallujah. He was the machine gunner and often went in last. As they ran in, he was shot by a sniper in the leg. It hit his main artery and sciatic nerve. He began to bleed out. He tried to put on his tourniquet, but it broke. His captain then pushed his finger into his artery to slow the blood until the medic could arrive. The medic said if he would have been 30 seconds later, Josh wouldn’t have made it. Medical reports reveal that he lost all of his blood that day. I’ve never met any of these guys, but God bless them, especially Cpl. Mason!

Josh was transported to Bethesda Naval Hospital near Washington DC. He underwent several surgeries and physical therapy for a month before coming home. I was able to stay with him the entire time.

He came home in time for hunting season in Michigan and Thanksgiving. A lot has happened since that bad October day.

Josh received a medical retirement from the Marine Corps and graduated from Adrian College with a  degree in business. He is now part-owner and runs a gun store in Addison, Semper Fi Guns and Ammo. He married a beautiful girl, Haley. They have three boys, Henry, James and Boone. He loves to hunt and fish and lives in a beautiful home in Hudson, Michigan. His injury has left him with paralysis in his right leg below his knee. But it doesn’t seem to slow him down. I’m very proud of the man he is.

I wanted to share our story with you to let you know that if you ever have to go through ‘the valley of the shadow of death’ you’ll be fine if Jesus is with you. You won’t like it, and it will change you, but you’ll be okay.

During this crisis, we prayed and asked people to pray. God came through and gave us peace as we struggled to understand. Many have had events worse than we faced, and God has gotten them through it all. I just encourage you to turn to Jesus before you need Him in your crisis event. Even before we knew Josh was hurt, God had provided the right people around him to save his life. To God be the glory!

Josh got a military tattoo on his bicep before he went to Iraq. I wasn’t thrilled, but when I saw what it was, I was more than proud. It depicts a set of dogtags. One one of the tags is his military I.D. in case it was ever needed to identify him. On the other are the words “Jn. 15:7“. It’s a Bible verse: “Greater love hath no man than this, that a man lay down his life for his friends.”

I feel grateful that Josh came home. But I also know how close we came to not having him. Just a week previous to Josh’s injury, I attended the Marine funeral of Dale Peterson’s son, Justin, who was killed while also serving in Iraq. Please pray and remember those who still grieve. It doesn’t go away. Many suffer from Post Tramatic Stress Syndrome. From the outside they may seem okay. But inside they still hurt. Pray for them Thank those who served. We may have differing politics about war, but we can still extend gratitude to those who are willing to give up their life that we might live in peace.

You can read a blog I wrote while we were in Bethesda. It has a diary of events and some pictures we took. http://www.burdinesadventure.blogspot.com/

Please read a moving tribute by Dale Peterson about his son, Justin. http://dalepeterson.org/justin.html

Josh’s Bethesda roommate, Josh Bleill, is a US Marine double amputee. He was with our Josh in Iraq. You can view a great video of his journey and wedding on youtube. He also wrote a book: One Step at a Time.