Will you be Left Behind? A Lesson on Bible Prophecy

This weekend, a movie will come out in theaters, Left Behind. It is a fictional account of what may happen as the end of the world begins to take place. It is based on the best selling book of the same name.

What does the Bible say about the end of the world?  Three basic things about the future from the Bible:

God is a holy God. When He created the universe and all that is in it, He created it very good.  However, when mankind sinned, it not only made them sinful in their nature, but it affected all the universe.  God cursed the ‘ground’ and it would rebel against Adam as he had rebelled against God. And the curse continues. As we look at the evil, suffering, sickness, and catastrophes in this world we need to look no further than man’s sin as the cause. This is the bad news. The good news is that God included sin and suffering in His plan for creation. In God’s plan the curse is a part of the cure. Everywhere – within us and without – the curse is evident. The suffering, chaos, and tragedy of our world shouts of our attention, telling us something is desperately wrong. As people turn to Christ for help, He extends His grace to them. The cross of Jesus has dealt completely with sin.  It has removed the penalty, power, and presence of sin.  When a person receives Jesus as Savior, they are released from the penalty for sin. As a person identifies with Jesus on the cross, the power of sin is weakened and finally removed at death.  And one day, the presence of sin will be removed by a re-creation of all the universe.  At the end of time, the physical universe will be incinerated, probably in an atomic reaction that disintegrates all matter as we know it. Even the ‘elements’ – the atomic components into which matter is ultimately divisible – will be destroyed.  Atoms, neutrons, protons, and electrons are all going to disintegrate.  Then God will bring about a new heaven and earth to be inhabited by perfect creation.

We don’t know when, but we know one day Jesus will come back to earth to set up His kingdom.  This is probably one of the most requested prayers – ‘thy kingdom come, thy will be done on earth as it is in heaven.’  As Christians, we can have God’s kingdom in our heart – Jesus can sit on the throne of our life.  But until He returns, the world will still be in rebellion against Him.  According to this and several Bible passages, the world will get worse and worse.  The last 7 years before His return are called ‘The Tribulation Period’ by many Bible teachers.  It is a time of great natural disasters, political upheaval and turmoil, and religious persecution. Jesus said that had this future time period not been shortened, nobody would survive it. As the nations of the earth gather together for one final battle, Jesus will return victorious to set up His kingdom for 1,000 years.  At its close, one final battle will end all battles and the curse will be removed for all eternity. 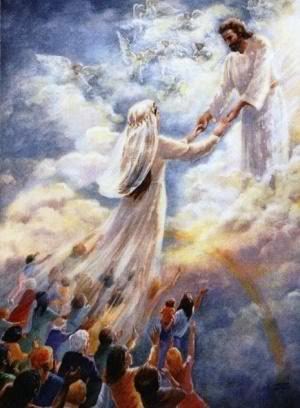 Just prior to ‘The 7 year Tribulation’ Jesus will return in the air, to come for His saints. This fulfills His pledge He made in John 14:1-3.  At the rapture, the dead come forth, their spirits, already with the Lord (2 Cor. 5:8; Phil. 1:23), are now joined to their resurrected bodies (1 Cor. 15:51,52). The living Christians will be raptured (snatched away) before the wrath of God begins in The Tribulation (1 Thess. 5:9).  This is a complete transformation (1 Cor. 15:51-52) and union with the Lord Jesus Christ that never ends.

So, in light of what will happen next, how should we respond?

The boss caught Calvin sitting at his desk staring out the window. “why aren’t you working Calvin?” Without much thought Calvin confessed to his boss, “Because I didn’t see you coming.”

Are you ready for Christ to return?

Read a similar post: 3 Signs of the End Times