Are You a Crack Pot? 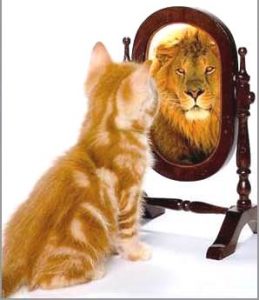 How is your self-image?

Poor self-image is a popular topic. Society blames personality flaws, depression, broken relationships, crime and many other negative results on poor self-image. The answer to poor self-image seems to be to make sure people realize how good they are. “I’m Okay, You’re Okay” was a best selling book when I was growing up. Yet, telling someone they are okay when they know they aren’t okay will not appease their conscience. Deep down people know they are flawed.

God has a better solution. Be truthful. Every person is a sinner – no exception. We have all failed and fallen short of the way God created us. But, God still sees value in every person. We are so valuable and loved by God that He sent His Son to die on a cross to endure the hurts of our sin. So every person does have real value because every person is valuable to God. And when a person believes and receives Jesus Christ as Lord and Savior, He enters into their life. Believers possess God the Son. For a Christian, it is not so much possessing a good self-image, but possessing a good Savior.

The Apostle Paul talks about this concept in 2 Corinthians 4. He has gone through some very personal attacks and his self-image is probably pretty poor at the time of this writing. So, if we judged Paul on what he feels about himself his self-image would be pretty low. But he’s not down because he knows in spite of himself, he has Jesus.

Here is what Paul says:

Paul likens himself to a clay jar containing a valuable treasure. Clay jars were the throwaway containers of the ancient world. It is interesting that Adam was made from the dust of the ground (Genesis 1-2). We’re all basically dirt – frail, weak, simple dirt.

But Paul reminds us that believers contain a treasure – JESUS, the glory of God – a light that shines out of darkness. Inside every Christian is the spiritual “light of the knowledge of the glory of God in the face of Jesus Christ”. We aren’t much on the outside, but we have everything on the inside. So when people are critical and demeaning we can simply agree with the fact we are flawed, cracked pots.

Everybody say it – I’M A CRACK POT!

St. Francis was once asked how he was able to accomplish so much. He replied, “This may be why: The Lord looked down from heaven and said, ‘Where can I find the weakest, littlest man on earth?’ Then he saw me and said ‘I’ve found him, and he won’t be proud of it. He’ll see that I am only using him because of his insignificance.”

God choses us to minister the gospel so that it will be all the more clear that He has accomplished the work.

Paul is positive about all the bad things that have happened to him. Even though his ‘clay pot’ has been broken and battered, it still has the valuable treasure inside. In fact, the cracks allow allow ‘the light’ of Jesus to shine through. That is why we are:

Adversity and afflictions did not happen to Paul every once in a while. He says he endured them “always.” These constant sufferings allowed him to identify with the dying of Jesus. Through suffering, a believer not only experiences the presence of Jesus but in a real way we show Jesus to others.

We would expect Paul to say “death is at work in us and life is at work in us.” In other words, the bad things that happened to us turned out okay. Even though that is true, Paul saw beyond his own circumstances. He said “death worketh in us but life in you.“ Paul’s bad experiences worked life in the Corinthians. That is the great exchange of the Gospel. It started with Jesus – He suffered death that we might live. So now, we suffer hardships that others might have life. We simply pay it forward.

Are you going through some hard times that seem to be giving you a poor self-image? Rather than feeling sorry for yourself and continue the downward spiral into depression, take some lessons from Paul. Regardless of what’s happening on the outside, if you have Jesus on the inside you won’t be crushed with the pressure. In fact, you will feel His presence and show His power better in bad times than good times. It doesn’t end with you – others will see you and be encouraged.