Last Saturday, Judy & I went to see Superman – Man of Steel.  I loved it! It gives every Superman fan all he can sit through in an action-packed, visually-stimulated 2 1/2 hour movie. Superman is my favorite super hero.

When I was about 5 or 6 years old, my dad and mom got me a Superman outfit to wear outside to play (my brother got Batman).  Superman was my hero – George Reeves style. I would watch the TV show and then go outside to re-enact the plot and become the hero. On a few occasions, I would wear my Superman outfit under my school clothes to pretend that I was secretly disguised as Superman ready for any mischief during recess.  I would stand, hands on hips, watching, really guarding, the playground. I don’t know what I would have done if a fight broke out in 1st grade because we didn’t have a phone booth. But I really wanted to be Superman.

Even as an adult, the Superman story is not just nostalgia, it is part of my dream. Deep down I think we all want to be Superman or at least have a Superman. Even if you are aren’t a fan, wouldn’t it be nice if there was a ‘real’ someone who stopped all the crime and violence, protected the innocent, and made this world a better place?

Superman was originated by two Jewish men in the 1930s outside Cleveland, Ohio. I think they dreamed of a Superman who could save their world (Depression, pre-World War 2). Admittedly, they used the Bible hero Samson as a model of their version of Superman. Yet, since the 30s, the writers, producers, and even actors of the Superman movies and TV shows have admitted using another model for the Superman character – Jesus. I don’t 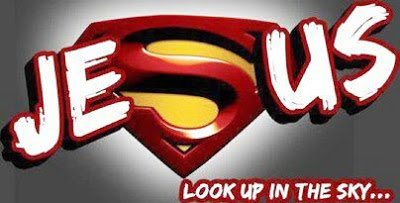 think their intention is to replace Jesus. But I do think they see in Jesus a quality of being that any superhero would want to emulate.

If you look closely at Superman-Man of Steel, you will discover several similarities in Superman and Jesus. (1) There is a strong father-son relationship. (2) Superman is willing to sacrifice himself for the world. (3)  Superman has a unique birth. (4) Superman is 33 years old when he reveals himself. (5) Several times the image of Superman is with outstretched arms – like on a cross. (A previous post – The Gospel According to Superman, also describes other similarities).

However, I noticed one striking difference. Unlike Jesus, Superman struggled with his identity. The summary plot of the movie is: “A young boy learns he has extraordinary powers and is not of this Earth. As a young man, he journeys to discover where he came from and what he was sent here to do.  But the hero in him must emerge if he is to save the world from annihilation and become the symbol of hope for all mankind.”

I actually preached about this difference on Sunday and this is the reason for today’s post. Jesus knew His identity. He knew where He came from, who He was, and what He was supposed to do. In the Gospel of John you will find 7 times Jesus makes a strong statement – “I AM …”  These statements uncover who Jesus believed Himself to be and will help us see who He can be to us. Let us discover, from His own words, who Jesus is:

Jesus is the Bread of Life

“And Jesus said unto them, I am the bread of life: he that cometh to me shall never hunger; and he that believeth on me shall never thirst.” (John 6:35)

Jesus said this after He fed a crowd of five thousand and people wanted more free food. As bread sustains physical life, so Christ offers spiritual life. The nourishment and satisfaction He offers are permanent.  Bread is a staple of life and symbol for nourishing food. As food is a necessity in life, so is Jesus.

In his book Into Thin Air, Jon Krakauer describes his team’s expedition to Mount Everest in 1996. One climber who died was Andy Harris. He stayed at the peak too long and on his trip down desperately needed oxygen. He communicated to the base camp that oxygen canisters left by other climbers were all empty. But they were all full. Andy was so disoriented he never opened them and died.  Ravi Zacharias comments on this mistake: “The very thing he held in his hand was absent in his brain and ravaged his capacity to recognize what he was clutching in his grasp.’  Similarly, I’m afraid many people have become close to Jesus religiously but fail to realize He is what they so desperately need.

Jesus is the Light of the World 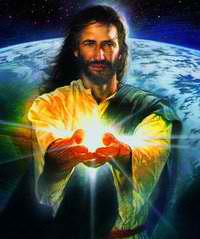 “Then spake Jesus again unto them, saying, I am the light of the world: he that follloweth me shall not walk in darkness, but shall have the light of life. (John 8:12).

Jesus said this during the feast of the Tabernacles, where a huge candelabra was lit. It reminded the Jews of the pillar of fire which guided their ancestors during the wilderness wanderings.  There is a whole lot of darkness in our lives, our souls, our hearts, our relationships and our world. To a world stumbling about in the darkness of sin, Christ offers Himself as a constant guide. Thank God that into our darkness a small but brilliant shaft of life shines.  Remember, it’s where we are broken, that the light can get in.

Southeast Christian Church in Louisville, Kentucky is a mega-church with a massive sanctuary. One unique problem that has occurred occasionally is that a bird has somehow flown into this massive room. However, the maintenance staff has come up with a unique solution to this problem.  They dim all the lights until it is completely dark in the room. They then open one door into the brightly lighted outside and the bird makes his exit within minutes.  Just so, Jesus will guide us in this dark world if we let Him.

These are just two of the ‘I am’ statements of Jesus. I will share the other five in Struggling with Identity? Part 2

Let me know what you thought of Superman: Man of Steel.  What do you think of the parallels between Superman and Jesus?  Keep the conversation going…